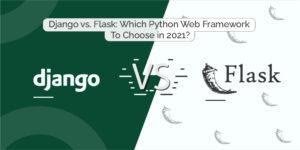 Python is extensively used for web development nowadays, although there are a variety of frameworks choices for Python web development. Most solutions can be automated with Python, processes may be improved, and repetitive jobs may be reduced.

However, whenever it comes to choosing a Framework about your next project, there’s always been a challenge. Once every month, new technologies and a framework emerge that address the shortcomings of the old one. When it comes to building a Web app project with Python, two alternatives jump out: lean Flask and robust Django. Both are high-level Python Web frameworks that have proven to be productive. Successful businesses make extensive use of both. Their ideologies, strengths, and shortcomings, on the other hand, are vastly different.

As Top Mobile App Development Company, we primarily employ well-known frameworks, such as Django or Flask, but we can also tell you a lot about some of the other frameworks.

This blog analyses the primary features of the frameworks and discusses which one should be used. Furthermore, we’ll look at when to use Flask versus Django and whether one framework is superior to the other.

Let’s begin the Django vs Flask debate by examining their underpinnings.

Flask is a lightweight framework that’s also known as a micro framework. Flask is written in Python, just like Django. Flask has a few basic functionalities and allows developers to add quite as many modules or components to an extension as they need. According to Quytech’s Python developers, Flask will enable you to add additional modules as needed.

What makes Flask so popular?

For better understanding, below, we’ve mentioned some of the functionalities and characteristics of Flask, so take a look!

Django is a prominent Python application framework that has garnered a lot of traction. It’s free and open-source. It’s even possible to refer to it as a code library with templates for dependable and sustainable apps. Django is also regarded as one of the safest web frameworks available. It has robust security features and makes obtaining website data from unreliable sources challenging.

What makes Django so popular?

As of now, we discussed a lot about both frameworks. Now, let’s move on and discuss the real deal!

Django vs Flask: Which one is better?

Below, we’ve mentioned a few points which help you to decide which one is better. So take a look!

Django is less adaptable than Flask due to its massive size and complexity. Flask provides a large variety of extensions that may be used to extend it easily. As a result, setting up Flask takes more time and effort, so we need to consider additional extensions. As a web framework, Flask is expandable, and the code is completely transparent to the user. He also has access to a number of website development frameworks and functions.

Django provides a comprehensive ORM architecture for developers to use. The ORM technology also allows developers to do typical database operations without having to write long SQL queries.

Flask, on either hand, does not have an ORM system built in. SQLAlchemy is required for development to proceed with databases and execute operations on the database.

Django provides built-in protection against common attack vectors such as SQL injection, CSRF, and XSS. On the other hand, because Flask’s codebase is smaller than Django’s, there wasn’t much open area for attacks. Flask depends on third-party extensions for security; therefore, the app is only as safe as the extensions.

So now we’ve highlighted the key differences between two frameworks, deciding whether to use Flask or Django ought to be a lot simpler.

Django intends to offer the framework with everything a developer could need to develop a web app, saving time and allowing developers to focus entirely on expanding each project’s capabilities individually. When you use Flask’s flexibility and customisation features to their full potential, it comes in handy. Flask can also be used to create small Web apps with minimal functionality.

Both Django and Flask have advantages and disadvantages. Consequently, it’s essential to note your project’s scope and requirements while selecting a framework. Django is a framework that is suitable for both small and large businesses. You have access to all of the necessary tools you want. Flask is ideal if you’d like more flexibility over the modules. The best approach to figure out which one best suits your project requirements is to hire python developers from top app development company; they will help you to get started.