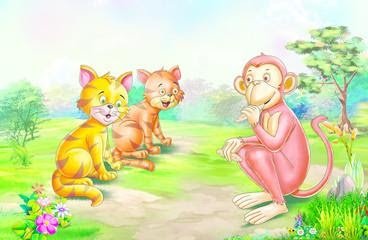 Panchatantra tales are one of the favorite stories of children. Written in Sanskrit in around 200BCE by Vishnu Sharma, it has now become popular not only among Indian kids but internationally too. These stories come in five famous volumes and that’s why it is called as ‘Panch’ means five ‘tantra’ means tales. These stories are not only entertaining but morally educating too.

In this article, we are listing 4 Best Panchatantra Stories in English that will suit your kid during bedtime or otherwise as well

1. The monkey and crocodile

Once upon a time, there lived a monkey on a tree on the banks of a river where a crocodile also dwelled. Soon they became friends. The monkey used to send fruits to the crocodile as a token of friendship. One day the monkey sent some sweet fruits for the crocodile’s wife. When the wife came to know about their friendship she became jealous and decided to get rid of the monkey. She asked her husband if the fruits of his friend were so sweet, how sweeter must be his heart. The crocodile went to the monkey and invited him for dinner. On their way to the crocodile’s home, the crocodile told the monkey about his wife’s intention. The clever monkey replied that he should have told him before and that he forgot his heart at the tree. Both of them went back and the monkey climbed the tree and in this way was able to save his life. The moral of the story is to choose friends carefully.

2. The clever rabbit and the lion

Once there lived a greedy lion in a jungle. He used to feed upon innocent animals. One day the animals made a pact with the lion that they will send each animal one by one to which the lion agreed. On the first day, they sent the clever and wiser rabbit. The rabbit went late and when asked by the lion the rabbit replied that there was another fierce lion in the jungle who wanted to hunt him. The lion became very angry and went with the rabbit to search for his competitor. The rabbit took him to the well and told him that the other lion lives in the well. The lion saw in the well after seeing his own reflection in the water roared upon in anger. The reflection roared back and the angry lion jumped to attack his own reflection. The lion was drowned and in this way, the clever rabbit saved the life of himself and of all the animals.

3. The mice and the elephant

There was a place in the jungle which was populated with a large number of mice. This area came in the way of elephants who used to cross it to go to the river from where they drank water and took baths. These giant elephants trampled many mice on their way to the river. One day the mice requested these elephants to spare them by watching their steps and they will surely return their favor. These elephants laughed and asked what favor the small creatures could do to these elephants. One day a group of hunters came to the jungle and caught these elephants. When the mice came to know about it they came to rescue them by nibbling the net. The elephants escaped and thanked the mice. The moral of the story is that a friend in need is a friend indeed.

4. The snake and faithful mongoose

There lived a farmer couple who had an infant baby. They had a pet mongoose as well. One day they had to leave the village for some work. They asked the mongoose to take care of their baby. While they were out a snake came to attack the baby. The mongoose attacked the snake and saved the baby. When the couple came they saw the blood-stained mouth of the mongoose and thinking he had attacked their baby, killed him. When they went to see their baby they were shocked to see the dead snake lying beside their safe baby. They regretted their act but it was too late. The moral of the story is to look before you leap.

The above-listed stories are the 4 Best Panchatantra Stories in English. Your kids will love them and surely will learn a lot from them. So do take time to tell your children these amazing educating and informative stories. 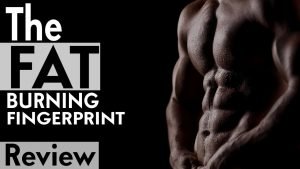 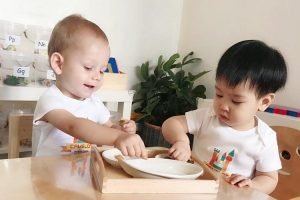